A total of 123 people have tested positive for Covid-19 in the past 24 hours, the highest figure in more than a week.

But no new deaths have been reported among those with a positive result, and the number of people in hospital dropped to 251, down seven.

Nicola Sturgeon said the figure was “worrying” but said the percentage of positive tests remained below 1%.

The level of testing has also reached record levels.

Five people are being treated in intensive care, no change on Saturday’s figure.

The combined figure for Saturday (88) and Sunday (123) was the biggest leap in positive cases in 48 hours since 22 May.

123 Covid cases reported today. The circumstances and any connections/patterns are being closely examined, and Test & Protect is working hard to break transmission chains. While the increase is of course a worry, it is important to note that the positivity rate remains below 1%. https://t.co/Bh09DWsEo0

The Scottish government’s daily update showed that six of the new cases were in the Grampian health board area, 39 in Greater Glasgow and Clyde, 26 in Lanarkshire and seven in Tayside.

All four health boards have dealt with clusters in previous weeks.

On Sunday NHS Greater Glasgow and Clyde said it was contact tracing in connection with St Aloysius College, a private school in the city. Previously the health board said it tracing contacts related to Gilmour & Dean Eurostampa, a printing firm based in Whiteinch, and Low Moss Prison in East Dunbartonshire. 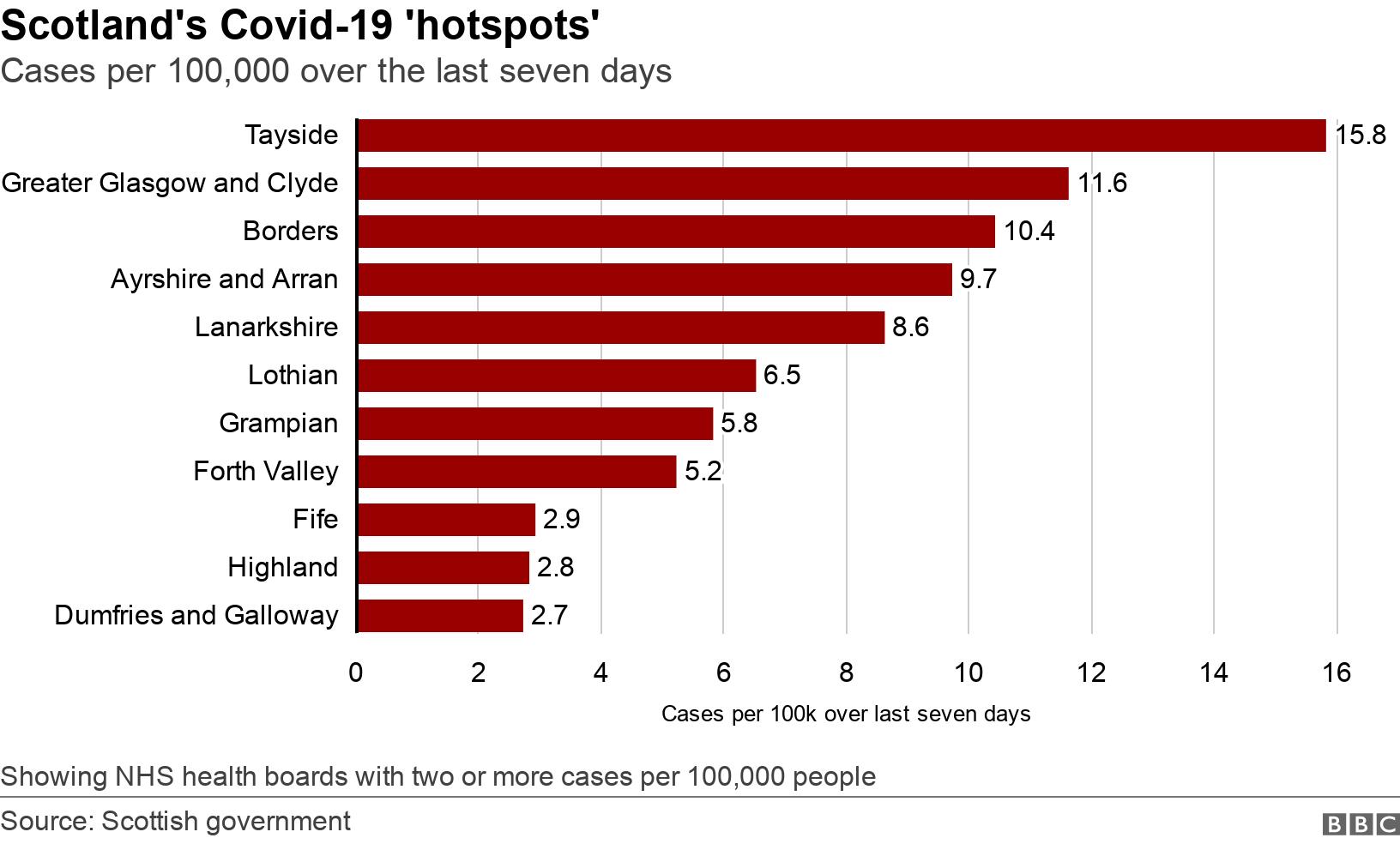 Nicola Sturgeon said the high number of new cases was “a worry” but said it was important to note that the positivity rate for tests carried out in Scotland remained below 1%.

The government said 0.8% of those being tested were currently coming back as positive, a slight increase on Saturday.

The first minister has repeatedly said that World Health Organisation guidance states the pandemic is under control if the number of new daily cases is less than 5% of those tested.

Mr Sturgeon said that Test and Protect was working hard to identify links and patterns and to break transmission chains.

Sunday’s figure for total daily tests was the highest since the start of the pandemic, the figures show.

Between Scottish and UK government controlled testing in Scotland, 26,786 people were screened.

Current testing capacity is 40,000 during the week, the first minister has stated previously, but the Scottish government is looking to increase that figure to 65,000 in preparation for a possible surge in demand over the winter months.

Timeline PhotosDo YOU have a favourite castle in #Scotland?🏰 There's certainly plenty to choose from! 😉📍 Kilchurn Castle, Argyll 📷 Instagram.com/chrisrussell_mylife ❗ For now travel is not permitted. Our content is intended as inspiration for future visits only. Please follow all current government guidelines to protect yourself & others 😊❗ #StayHome #StaySafe ...

Timeline PhotosTake a moment, sit back & enjoy 🍃What comes to mind when YOU see the Highlands? 😍 📍 Glencoe Lochan📷 Instagram.com/borsphotography ❗ For now travel is not permitted. Our content is intended as inspiration for future visits only. Please follow all current government guidelines to protect yourself & others 😊❗ #StayHome #StaySafe ...